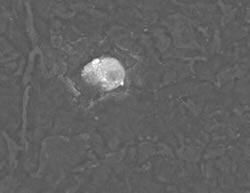 The characteristic particles for GSR often contain combinations of the elements Lead (Pb), Barium (Ba) and Antimony (Sb). In general these particles are very small – in the range of 0.5 -10 microns. In the scanning electron microscope, these particles can be found, magnified and analyzed chemically, and the presence of GSR on a sample confirmed. The elements constituting GSR can originate from the primer, the bullet, a coating or jacket on the bullet, cartridge components, and previous residues in the barrel. Residue particles are arbitrarily divided into two types, depending on their primary source: primer particles and bullet particles. Particles containing Pb, Sb and Ba and those containing Sb and Ba (also referred to as two-component particles) are typical inorganic components from the primer, and are classified as primer particles. Large numbers of particles composed mainly of Pb originate from the bullet and are termed bullet particles. In normal GSR suspect-taping, the particles on the adhesive tape are typically less than 10 microns in size (usually 0.5 – 2 microns). There are generally few particles on the taping, divided over a relatively large area. As the majority of the GSR particles have a small diameter (less than 2 microns), a large surface has to be analyzed in order to yield results of sufficient statistical validity. Because the sample is often not smooth and contains particles which are of no particular interest, the task of locating and analyzing GSR particles manually by operator control is not practical, and is a tedious and time-consuming task which runs a high risk of introducing errors. For these reasons, an automatic routine has been developed that allows unattended analysis (overnight) followed by operator-assisted validation and summarizing of results.