When a gun is fired, hot gasses and small particles are generated during the explosion of the primer and the propellant in the cartridge casing. These particles, as well as those formed by the condensation of some of the hot gases, are deposited on parts of the hand and clothes of the person firing the gun, as well as on other objects in the vicinity of the weapon. 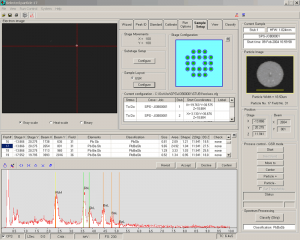 Graphical user interface of the GSR software, showing a typical spectrum for a 3-component particle, plus the stage configuration set-up.

These small particles are called gunshot (GSR) or firearms residue. Because they have distinctive characteristics, their presence forms evidence that examined persons have been close to a gun being fired. This kind of evidence is often used in criminal court cases involving the use of firearms. The residues contain elements that result from the propellant and primer decomposing, as well as from the bullet and cartridge case. Samples of GSR are taken from people suspected of firing a gun by pressing adhesive material to the areas of interest, for example, fingers, the top part of the hand and clothes. In this way particles are transferred from the area of interest onto a small sample for examination in a scanning electron microscope (SEM) connected to an X-ray micro-analysis system equipped with a GSR software package developed by Ardennes Analytique. This software package allows automated, unattended classification of GSR particles.